In front of you, there is a cross in the Field dated 1867. This is a granite cross standing in a field. It bears the date 1867 and, as already mentioned in association with the field Cross near St. Colmcille’s Well, was one of the many erected about this time as a precaution against cattle plague, probably in the form of foot and mouth disease or some say pleuropneumonia others say black leg.

The plague decimated the herds of County Dublin and the scarcity of milk caused great distress. The Archbishop, Cardinal Paul Cullen , the first Irish Cardinal ordered that the fields be blessed and, as a memorial, a number of crosses were erected in 1867.

In addition to the cross adjacent to St.Colmcille’s Well there are similar field crosses at Kiltipper and Tymon North. The remains of old stone walls can be seen here and also appear intermittently through the Park. These walls seem to have lined the route of what later became known as the Firhouse Road. Knocklyon Castle lies a further 200 metres south of the plague Cross. 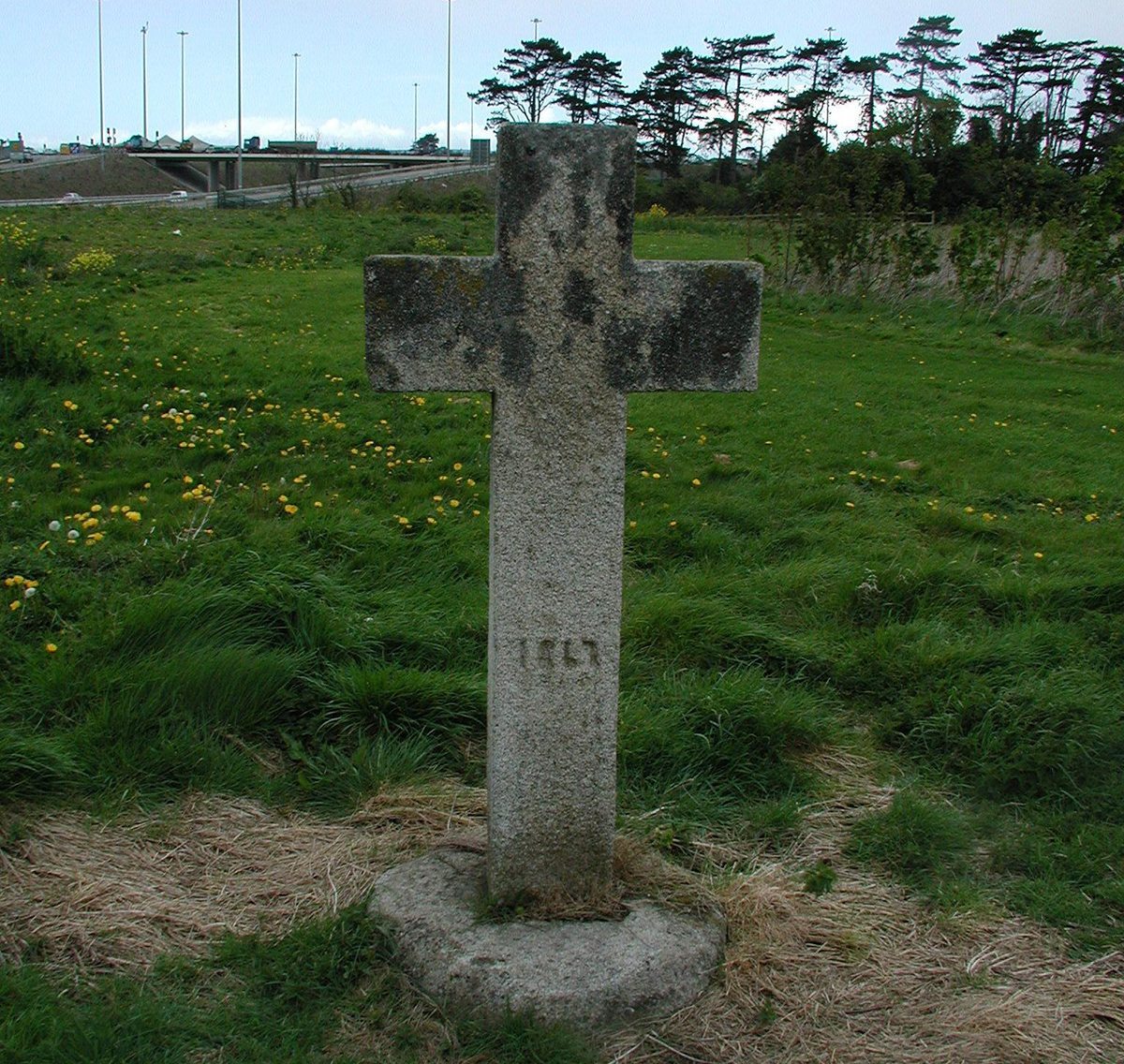 Knocklyon Castle is over five hundred years old. Situated on Ballycullen Road, it’s a square, three-storied building with round towers at the two opposite corners. These towers once had conically shaped roofs. The house is three storeyed, with rounded towers on opposite corners (to the east and west) and rounded external corners.

The walls, which are immensely thick at ground level, appear to have been built without foundations and are of uncoursed rubble with a slight batter. There is a course of decorative brick at eaves level. Attractive features are the round headed mullioned windows on the front elevation. Of the gateway, which is attached to the house, only one pier remains. 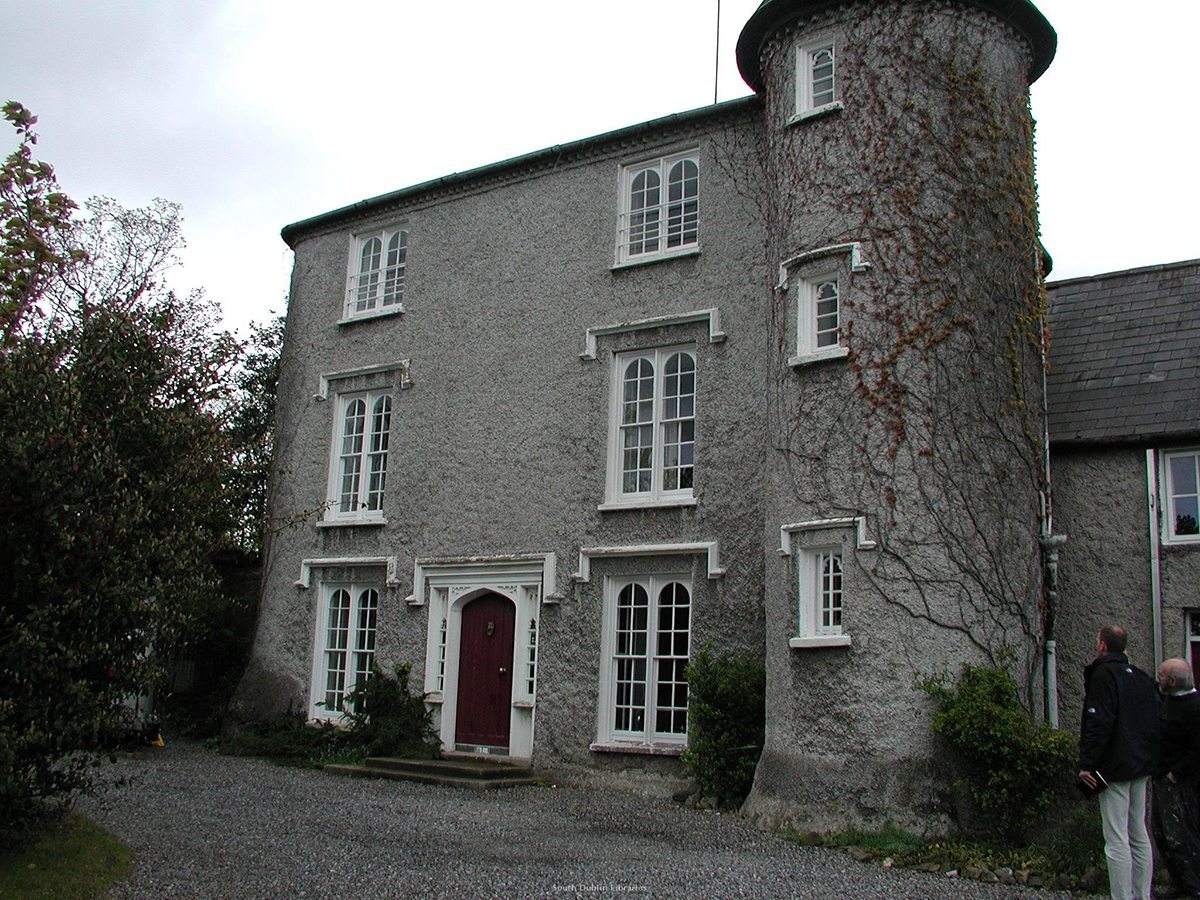 The original castle was built about the fifteenth century, at which time the Dodder formed the boundary to the Pale. The castle would have been in the hinterland between the Pale and the mountain strongholds of the O’Byrnes and O’Tooles. This area was known as the Marches or Marchlands, a place of frequent guerrilla raids and skirmishes.

The conditions of life closely resembled those existing on the Scottish border. The size of the building (approximately twenty-eight feet by eighteen feet internally) and its geographical position (beside the Pale) would suggest that it was built as a result of the £10 subsidy which was given in the ten years following 1429. The subsidy was for embattled or fortified castles and towers which were intended as defences for the Pale counties.

The statute of Henry VI stated explicitly “It is agreed and asserted that every liege-man of Our Lord the King of the said counties who chooses to build a castle or tower sufficiently embattled or fortified within the next ten years to wit twenty feet in length, sixteen feet in width and forty feet in height or more, that the Commons of the said counties shall pay to the said person to build the said castle or tower ten pounds by way of subsidy.” 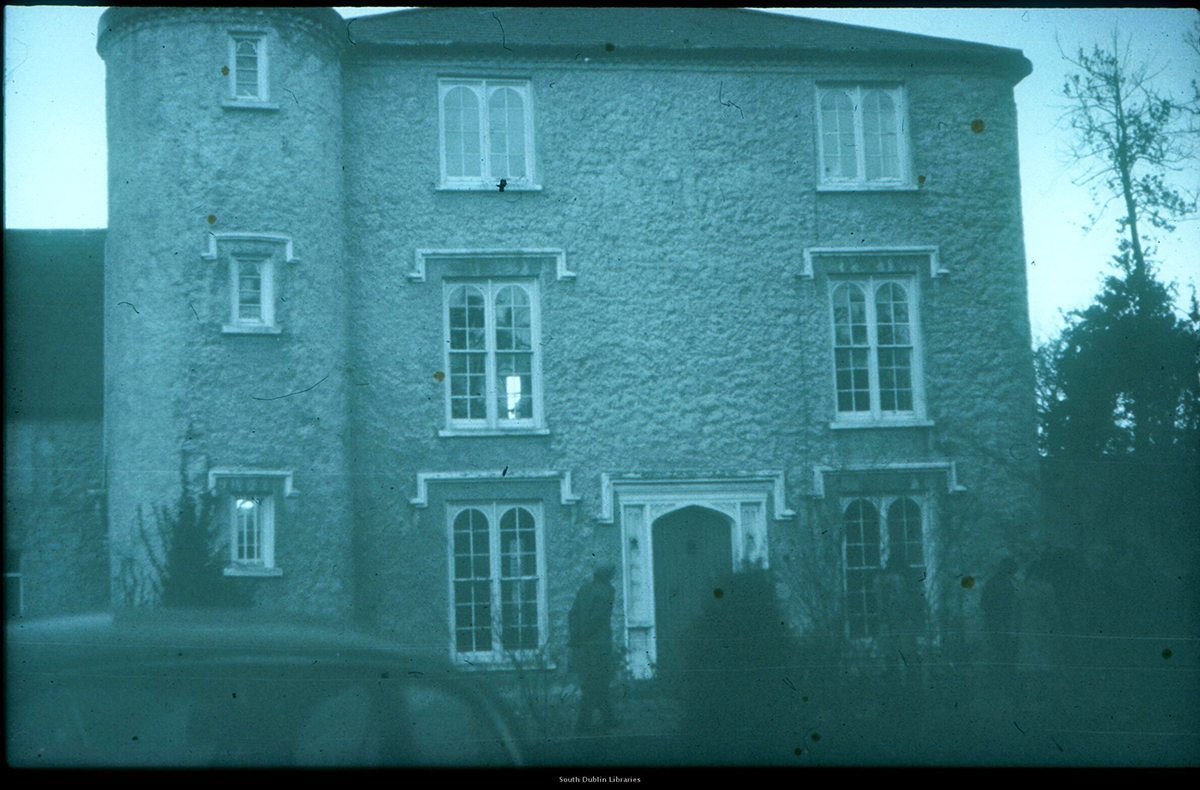 Following the Reformation, the castle was held by John Burnell until 1575. It appears the tenancy was next granted to John Bathe of Drumcondra, on 24th October, 1577. He built Drumcondra Castle in 1560, where his distinguished son, Father William Bathe, S J, was born on 25th April, 1564- John Bathe was Attorney General and was promoted to Chancellor of the Exchequer in May, 1579, a position he held until his death on 18th July, 1586.

In 1584, Mr Justice Bathe gave up the lease of Knocklyon Castle, and it was then granted to Captain Anthony Deering on 14th January,1585. The castle was described then as “ruinous” and its condition was not changed during the short tenancy of Deering. He found the land unprofitable and, of course, did not live in the ruined castle. Between1588 – 91, he was preoccupied with trying to secure a pension from Queen Elizabeth I in lieu of money he had spent on behalf of Her Majesty.

At last, in August 1591, he was granted six shillings a day! In 1619, when Sir Adam Loftus acquired the castle, town and lands of Rathfarnham, he also obtained Oldcourt, Tymon and the “ploughland of Knocklyn”, in capite, by Knight service, at fifteen shillings for ever. In 1620, Loftus leased Knocklyon to Pierse Archbold, who rebuilt the castle. He was the son of Richard Archbold of Kilmacud and married the daughter of Barnaby Relly of Tymon and their son was Gerald Archbold of Jobstown. Archbold was a Catholic and, to ensure that his children received a Catholic education, he employed, in the words of Archbishop Buckeley, “a Popish schoolmaster” on his estate.

He died in 1644 and was buried in Taney (Dundrum). In 1723, Sir William Conolly bought the Loftus lands. The Ledwich family, who were Quakers, became the tenants in 1780 and, during their stay; the house was extended by a two-storey addition, containing kitchen, loft and storeroom. In 1798, Austin Ledwich joined Lord Ely’s constabulary, but changed his allegiance, became a Fenian and, unfortunately, lost his life during the Rising. In 1826, the McGrane family acquired the property and they lived and farmed there for over one hundred years and six generations. In 1964, they sold the house and farm to developers. In 1966, the O’Clery family bought the house and orchard and, in 1974, it became the property of Ann (nee O’Clery) and Chris Shouldice. Housing estates were built on the land. Knocklyon Castle is included in List 1 Draft Development Plan 1991 for County Dublin.

The present owners, the Shouldices, hope to restore the towers to their original splendour in the near future.