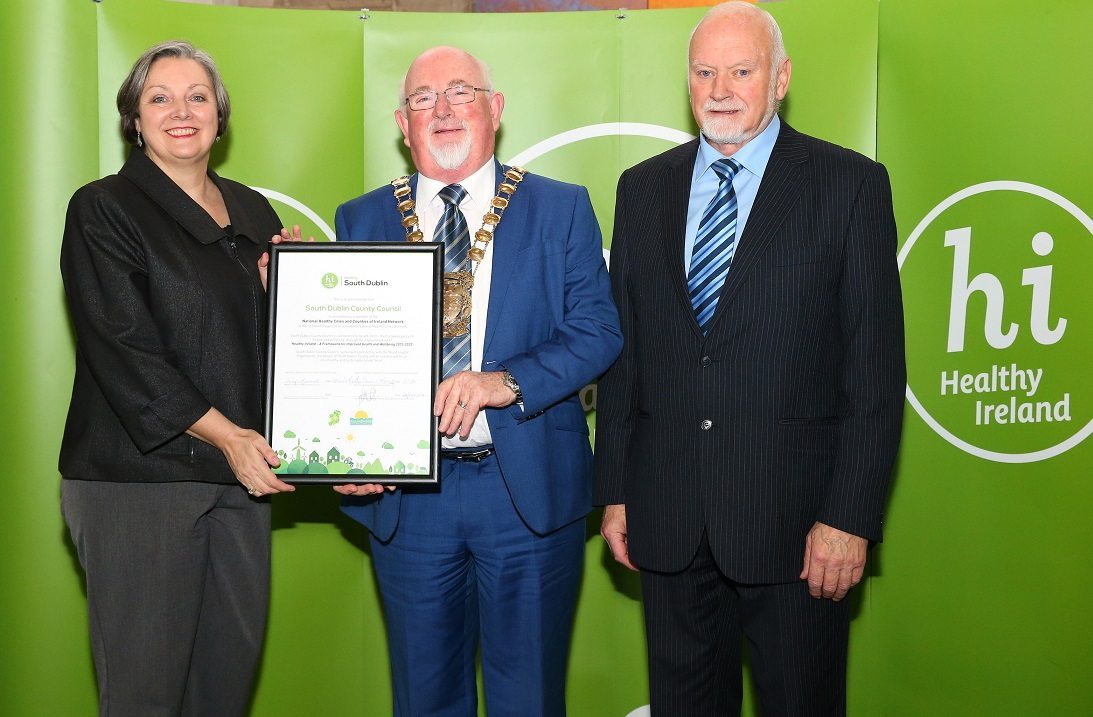 In recognition of South Dublin County Council’s commitment to support the implementation of Healthy Ireland – the National Framework for Improved Health and Wellbeing at Local Level, the Minister of State for Health Promotion, Marcella Corcoran Kennedy, T.D, presented South Dublin County with a certificate of accreditation to the National Healthy Cities and Counties of Ireland Network.

As one of the first counties in Ireland to become a member the National Healthy Cities and Counties of Ireland Network, Minister Corcoran Kennedy, T.D., congratulated South Dublin County Council on taking the lead, and for making a commitment, to work to make South Dublin a healthier place for all. Minister Corcoran Kennedy added that “as a former elected member of a Local Authority, I know that Local Authorities are uniquely placed to bridge the gap between national policy and local implementation. I know the influence and reach that Local Authorities, in particular the recently formed Local Community Development Committees, have in every community and I see huge potential for them to contribute to building a healthier Ireland”.

Ms Elisabeth Bengtsson, representative from the World Health Organization (WHO), explained that “declarations and strategies on international and national levels are important as common grounds for understanding; but to make them happen, and to foster real change, they have to be interpreted and put into actions at the local level where people live their lives and can have their say and Healthy South Dublin is taking that step”.
Billy Coman, Director of Housing, Community and Social Development in South Dublin County Council and Chair of the Healthy South Dublin Forum explained that “as the influences on health such as employment, environment, transport, housing, community development, and food supply are so varied and complex; to address health issues and promote good health, it is important to take a multi-agency approach. The commitment to Healthy South Dublin provides this focus and space”.

The Healthy Cities project is a global World Health Organization (WHO) movement, set up initially in 1987 with eleven individual cities. The concept is based on the importance of local action and the key role of local governments and Local Authorities in health and sustainable development.
As the WHO programme expanded, National Networks were established. National Networks connect and support all cities and counties within their country. Today, there are accredited National Networks in 20 countries in the WHO European Region, bringing together more than 1,100 cities, counties and towns. The National Healthy Cities and Counties of Ireland Network received accreditation in 2016.

Healthy Ireland
Healthy Ireland, A Framework for Improved Health and Wellbeing 2013-2025 was launched in March 2013. It is the national framework for action to improve the health and wellbeing of the country over the coming generation. Healthy Ireland takes a ‘whole of government’ and ‘whole of society’ approach to tackling the major lifestyle issues which lead to negative health outcomes. The Framework aims to shift the focus to prevention, seeks to reduce health inequalities, and emphasises the need to empower people and communities to better look after their own health and wellbeing.

The vision of Healthy Ireland is an Ireland where everyone can enjoy physical and mental health and wellbeing to their full potential, where wellbeing is valued and supported at every level of society and is everyone’s responsibility.

Building relationships and strengthening partnerships is a key focus of Healthy Ireland – with other Government Departments, Local Authorities, the education sector, and with the wider business, voluntary and community sectors. Structures supporting the work include a Cross Sectoral Group comprising senior officials from Government Departments and key agencies; and a Healthy Ireland Council comprising representation from a wide range of stakeholder sectors.
The approach taken in Healthy Ireland draws on the WHO Health 2020, the European health policy framework, and on Health in all Policies.

Local Authorities
Local Authorities have a significant role in protecting and promoting their citizens’ health and wellbeing. Under the Local Government Reform Act (2014), as set out in Putting People First, each Local Authority has set up a Local Community Development Committee (LCDC) to develop a Local Economic and Community Plan (LECP). The purpose of the LCDC is to promote and support the economic, local and community development through greater integration in the planning of and delivery of local and community development services and interventions.
Working with a range of organisations and groups, the LCDCs are ideally placed to support and implement Healthy Ireland at the local level in response to local people’s needs. LCDCs are key partners in realising a Healthy Ireland, and play a lead role in the development of the National Healthy Cities and Counties Network of Ireland.

– provide a forum for exchanging views and encouraging best practice in promoting health and wellbeing;

– highlight issues impacting on health and wellbeing, and seek to influence national policy

– provide a representative voice for Ireland within the WHO Network of European National Healthy Cities Networks.

National Healthy Cities and Counties of Ireland Committee
The National Healthy Cities and Counties of Ireland Network Committee has representatives from Government Departments, including the Department of Health and Department of Housing, Planning, Community and Local Government, the HSE, the Institute of Public Health, the Federation of Irish Sport and local political and community representatives. Minister of State for Health Promotion, Ms Marcella Corcoran Kennedy, T.D., is a member of the Committee.