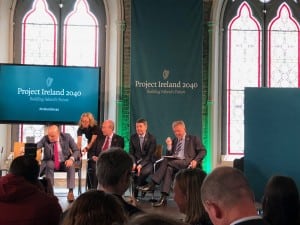 Knocklyon Network was invited to attend the launch today of the Governments Plans for Climate Change as part of the 2040 Development Plan.  As a mark of the importance of this event Five Full Ministers and the Taoiseach  were in attendance as well as Hildegarde Naugton TD Chair of the Committee of Communications, Climate Action and Environment.   The presentation by the Ministers was followed by two interesting Panel discussions with questions and responses from the Audience.   It was a very interesting morning and our Sustainable Energy Community was very evident in the discussions as a model for rolling out change.  It was mentioned on numerous occassions that Climate change and Carbon reduction is not something the Government can impose on us.  We will be called on to make major changes in our life-style.  We are called to be conscious of what we buy, what energy we use, and our responsibility to reduce waste in all it’s guises,Fuel, Energy, Food, Packaging, Appliances, Goods in general, the cars we drive,etc. etc.

The Minister for Communications, Climate Action and Environment, Denis Naughten T.D., has today launched the Climate Action priority of Project Ireland 2040 “Empowering Communities for Climate Action” at an event in the Smock Alley Theatre in Dublin. Building on the 2017 National Mitigation Plan, the National Development Plan prioritises €21.8bn for climate action. This substantial investment will both require, and support, behavioural change in individual and communities across Ireland.

Minister Naughten was joined by An Taoiseach Leo Varadkar TD, Minister for Finance Paschal Donohoe TD, Minister for Housing, Planning & Local Government Eoghan Murphy TD, Minister for Transport, Tourism and Sport Shane Ross TD and Minister for Agriculture, Food and the Marine Michael Creed TD who all have key roles in delivering on our climate objectives within their sectors.

The event included moderated panel discussions exploring the roles and opportunities for communities in the low carbon transition.

At the Project Ireland 2040 Climate Action and Environment announcement today in Smock Alley, Taoiseach Leo Varadkar T.D. said “Climate action is a top priority of this government.  Future generations depend on the actions we take today.  Project Ireland 2040 sets out our ambitions in regard to building a sustainable, low-carbon society, ambitions that can only be realised by working together with communities, businesses and individuals.” 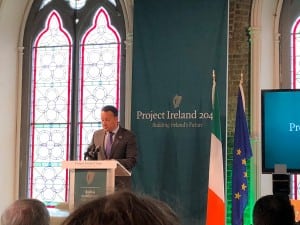 At the launch, Minister Denis Naughten said: “Effective change is putting the levers for climate action into people’s hands. Delivery requires fundamental transformation in our thinking and Project Ireland 2040 represents a significant step-change in our approach, both in the scale of our ambition and the funding that we’re making available as a Government to meet the challenges.  Well over €1 in every €5 is to be spent under the National Development Plan on climate mitigation and adaptation. This Government is serious about taking strong action on climate change.  Today we demonstrated our commitment and unity behind meeting our objectives together.  I also see individuals and communities as an essential part of the low carbon transition. While Government has a leadership role, we also recognise that we don’t have a monopoly on the solutions for the societal transformation required for Ireland to become a low carbon and climate resilient society.“

Minister for Finance Paschal Donohoe said: “This Government fully recognises the challenge we face in relation to Climate Action and has set out a clear strategy to address this challenge through the National Mitigation Plan and National Adaptation Framework. Our ambition to fund these strategies through the National Development Plan is clearly outlined and this includes a commitment to invest €21.8 billion in achieving a transition to a low carbon and climate resilient economy. Through the actions of both this Government, and the previous Government, Ireland has returned to a position where we can now make these much needed investments. It will only be through continued prudent management of our resources and our economy that we as a society will continue to be in a position to make these necessary investments into the future. And investing in low carbon technologies and infrastructure and climate resilience is perhaps the most prudent investment there is in our collective future.” 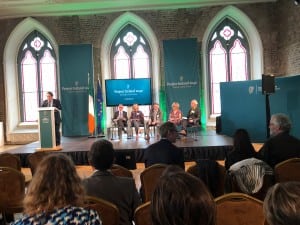 Minister for Housing, Planning & Local Government Eoghan Murphy said “At the heart of Project Ireland 2040 is a long-term national framework for land use planning, urban and rural development, infrastructure delivery and environmental protection that is fundamental to creating the conditions to support transition to a low carbon society.  Our focus is now on implementation and investment to deliver a prosperous and sustainable, low carbon future.”

Minister for Agriculture, Food and the Marine Michael Creed said “The overall theme for today’s event is “Empowering Communities for Climate Action” and it is very appropriate. I recognise this particularly as agriculture is at the heart of our rural communities, and I have long believed that it is through empowering communities to take action that we can make the greatest gains for both those communities and the environment, and indeed for all our citizens.” 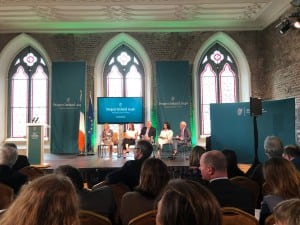 Minister for Transport, Tourism and Sport Shane Ross said “In Budget 2018 we began the process of investing wisely to increase capacity and enhance the range of alternatives to the car.  Project 2040 will further build upon this investment with developments such as the new Metro Link and DART expansion in Dublin, and more widely the BusConnects Programme. We also start our decisive shift away from carbon-intensive transport by electrifying more of the rail network, with a commitment to stop buying diesel only buses, and through earmarking investments to support the transition to zero emission capable cars.”