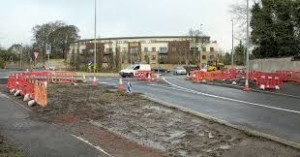 Apologies that Report does not copy very well.  If you would like the PDF form Email us at Knocklyonnetwork@gmail.com and we will forward you a copy.