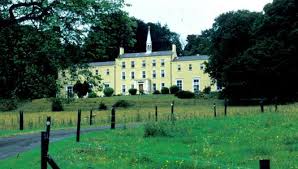 South Dublin County Council in their Development Plan propose a Tourism/Interpretive Centre for the mountains.   We are in complete agreement with this proposal as the mountains are a wonderful area for beauty, recreation and exercise and much more.   They are currently doing a feasability study on building a new Centre in the midst of Massey’s Woods and combining with Montpelier Hill,location of the Hell Fire Club.   We have proposed to our Councillors for Knocklyon that instead of cutting some of the beautiful trees of Massey’s to make way for buildings and Car Parks etc., they should consider purchasing Orlagh College.  The college is on the market along with the surrounding grounds.   The college is adjacent to Montpelier Hill and access to the Hell Fire Club and Masseys could be made from the back of Orlagh. There is adequate open fields in front of Orlagh which could be used for parking , etc. Because it is on a slope this car parking would not interfere with the fabulous views from Orlagh.

The house has adequate rooms inside for Nature Rooms,  Video rooms, Lectures, and even accommodation if required.

Most important Orlagh House has a very interesting history that is connected with South Dublin(see below).    The Mayor put our proposal to the council.

“Knocklyon Network have raised the possibility of the Council purchasing Orlagh House, which will be on sale later this year, as part of our Dublin Mountains Tourism Strategy and to preserve the heritage of the county. If passed, can we refer this motion to the Arts, Culture & Heritage SPC.”

Having identified the Dublin Mountains as the primary tourism asset of the County, the members will be aware that matters in this regard have progressed with the presentation (to March Council meeting) of the feasibility findings relating to the proposed tourism flagship facility at Montpelier & Massys Wood.

Subject to planning permission and other arrangements, it is envisaged that this facility, and its related services, will be the primary focus of future resources regarding tourism in the Dublin Mountains. The proposal will of course also preserve the heritage of the County.

Orlagh House is a protected structure and as such there would be very significant costs associated with any required modification of the property, in addition to the purchase costs. The nature of the property, and its locations is likely therefore to mean that the tourist development opportunity would be very limited and extremely costly. It is not proposed therefore that the purchase of Orlagh House would be the optimum solution to deliver the objectives of the Tourism Strategy.

Please contact your local Councillor if you support our proposal and let us know of your support via Facebook.

ORLAGH COLLEGE
The entrance gate to Orlagh College is situated at the top of Ballycullen
Road. In a beautiful setting surrounded by trees, its white facade and spire.

It can be seen for miles around. It was built around the year 1790 by Mr. Lundy
Foot who named the house ‘Footmount’. Later he re-named it Orlagh.
Foot. a very wealthy businessman, belonged to a family of snuff and
tobacco merchants who had premises in Essex and Westmoreland Streets., He was also a magistrate whose most infamous trial was that of the three
Kearneys in 1816. Joe and Billy Kearney and their father Peter were charged
with conspiracy to murder John Kinlan, a gamekeeper of local landlord
Ponsonby Shaw of Friarstown. The three Kearneys were sentenced to death
on the charge, though the body of Kinlan was not found. They were hanged
in the presence of thousands of country people in a field near Old Bawn
Bridge. Lundy Foot was subsequently murdered in 1835 in County Kilkenny,
supposedly by relatives of the Kearneys, although this was never proven.
Lundy Foot sold Orlagh to Nathaniel Calwell, later a governor of the Bank
of Ireland, in the 1830s. In 1836 it was sold to Carew O’Dwyer, who rebuilt it,
adding spacious rooms and stables and laying out new gardens and grounds.
The large banqueting hall was hung with tapestries from Paris and used for
the lavish entertainment of such notables as Daniel O’Connell and members
of Dublin Corporation. O’Dwyer later took up residence in England and
Orlagh was bought by the Augustinian Order in 1872. Both Patrick Pearse
and Eoin McNeill visited Orlagh in later years. The Augustinians now use
Orlagh as a novitiate for young men training for the priesthood.