One Tower, One thousand years of stories in historic Clondalkin Village 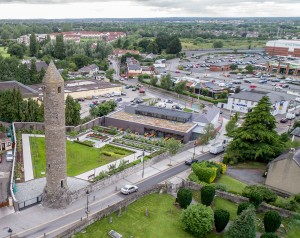 The latest addition to the South Dublin tourism and heritage offering opened its doors for the first time on Monday 3rd July, 2017. The much anticipated Round Tower visitor centre in Clondalkin features an interpretative centre, exhibition space, café, gardens, terrace dining and craft shop and is nestled in the heart of historic Clondalkin Village, within minutes of the Grand Canal Greenway, Corkagh Regional Park and nearby Irish Cultural Centre, Áras Chrónáin. It is also home to the first Happy Pear Café and foodstore in Dublin.

The Interpretative Centre in a fun and interactive way tells the story of that most unique of Irish cultural features, the Round Tower – what were they for, how were they built, who built them and can I build one!

“The Round Tower, Clondalkin has stood witness to over 1,000 years of social and cultural development of the village, from monastic to modern, Viking to Victorian”, said Daniel McLoughlin, Chief Executive of South Dublin County Council. “The restored Mill Cottages on the site of the 8th Century Round Tower are home to eight rooms in which these stories unfold through sight, sound and stunning visuals. The opening of this exciting facility comes after years of work between South Dublin County Council, the Office of Public Works and the local community and marks a significant investment by the local authority in the economic and tourism development of South Dublin County.”

Suitable for all ages, the interactive multimedia exhibition tells the story of over one thousand years of Clondalkin’s history and heritage. The exhibition delves into Clondalkin’s medieval origins from the foundation of St Crónán Mo-Chua’s monastery to revealing intriguing clues to the town’s Viking past.Discover what life was like in Clondalkin during the 1800s, when the visitor centre buildings were originally constructed. Find out what makes the round towers of Ireland unique, and have your say about what you think makes them so special. Have a go at building your own Round Tower, dress up in costume and imagine what Clondalkin was like in days gone by. Admission to the exhibition is free!

The Round Tower, Clondalkin, Brú Chrónáin is being run by The Happy Pear and features a Happy Pear café and food store. The Happy Pear is also employing around 30 people from the local area.

The bright and airy café, with seating for over 50, also boasts a sprawling outdoor terrace area with an additional 50 outdoor seats – the perfect vantage point to enjoy the beautifully landscaped gardens and Round Tower. The food store on the front of the building also offers take away coffee and a range of Happy Pear food products.

The Happy Pear co-founders and Directors, David and Stephen Flynn said “We’re so honoured and privileged to be part of this really great centre in the heart of Clondalkin. The interpretive centre is amazing and truly celebrates Clondalkin’s rich heritage and the history of Ireland’s Round Towers. It’s such a fantastic spot with gorgeous, herbaceous gardens and the impressive Round Tower as a backdrop.”

“Our new Happy Pear team is really great and we’re all looking forward to welcoming the local community, and serving great quality food, in the months and years ahead.”

The Happy Pear café will open from 8am – 8pm (Mon – Sun) during the summer months, serving the highest quality and great tasting food made by The Happy Pear.

The Round Tower, Clondalkin – Brú Chrónáin:

Clondalkin Round Tower is about 1000 years old. It was built in the centre of an early medieval monastery, which was originally founded by St Crónán Mo-Chua in the late 600s or early 700s.

No one knows for certain why round towers were built or what they were used for. But most likely, they were mainly used as bell towers.

The tower is 27.5 metres high and just four metres wide at the bottom.  Like others around the country, Clondalkin Round Tower has a raised doorway and four windows at the top, which face towards the four compass points: north, south, east and west.

Inside there were once six floors, which were all connected with ladders. There are now five floors, and the original openings for the door and windows all survive.