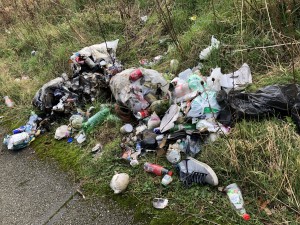 This is a scene from the pathway through Dodder Valley Park at the back of Cherryfield Way Halting site.    The burnt out rubbish appeared to be bags that had been collected by someone as they were in Clear SDCC polythene bags.   Possibly collected by Dodder Action and awaiting collection by SDCC, possibly left so long and then burnt out.     However, while the occupants of Cherryfield Way are probably responsible for a lot of the rubbish around their site, what about SDCC respnsibility.    They gave permission for a halting site to be built in the middle of designated Linear Park. 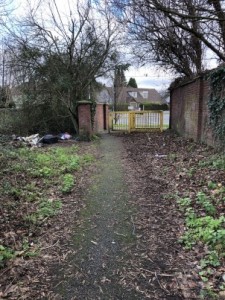 This is the pathway from the entrance at the end of the Knocklyon Road alongside the Dodder.   The path is totally ovegrown and would be virtually impassable for someone with a buggy .  It has been reduced to the width of one person.    Needless to say, because of it’s location and because it passes all the filth behind the halting site, it is rarely used.     This is true of most of the park.   Aside from the playing fields which are well used by the clubs especially Boden GAA, most of the rest of the park from above location right up the former Victory Centre is frequented mainly by Dog walkers. 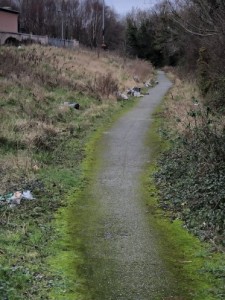 What is attractive about Dodder Valley Park?   It is a Riverside walk.   It is on our doorstep.      It is quite long and a good size.     It is good playing pitches.   It has excellent bio-diversity and natural meadows.    But.  It has no playground.    It has very inadequate pathways.   It has few planted shrubbery.    It has no Pond or waterway.     Most of the walkway through it ,you cannot see the Dodder.     There is no access to the Dodder for Fishing.      It has no management plan.    It has no bins.    There is no management.   We have asked for a Development Plan for the Dodder Valley Park from Templeogue Bridge to the Church of Scientology for over 25 years.   Nothing has come out of the SDCC. 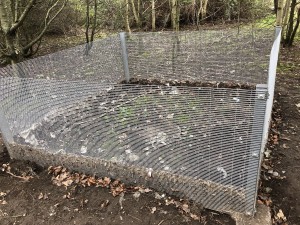 So we now have the above structure .   This is new to me in the Park.   It is in a copse of trees as you approach the M50 underpass.   It surrounds a Manhole.   Anyone ,know what it is for?     When will we get the Regional Playground we have been promised.    There was to be new Pitch, running track and BMX track put in at the section behind the Carmelite Convent this year , no progress.      It is like the Roundabout at Orlagh.   Nobody asked for it so SDCC decided to give us something we do not need nor asked for to spend some money in Knocklyon.    That money could have been put to giving us a decent , clean , safe park for families to go with their children and enjoy. 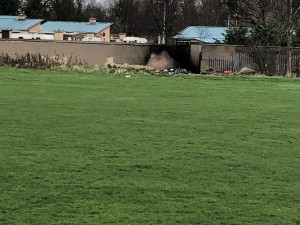 In Octobre 2017 , SDCC proposed a scheme for Travellers Halting Sites ,whereby Bins would be provided and the cost would be partly paid by deductions from the Travellers Social Welfare payments.     Our halting site in Cherryfield Way signed up for this.   In April 2018 Knocklyon Network was approached by a resident of the halting site representing the residents.   We were asked to intervene with the Council to get this bin proposal implemented.    In return the Traveller representative said they would clean up the area around the site and keep it clean.   We met with A Mr. Fitzgibbon in charge of all Halting sites in SDCC.    He said they were awaiting approval from Social Protection.   Despite repated requests to him and one of our Councillors who sits on the Traveller committee, there has been no response and no bins supplied.    We have learnt recently that no approach was made to Social Protection and that even if it had been made this would not be legally acceptable.   So no proposals from SDCC .  The area around the Halting site has got worse as you can see.   What is SDCC going to do about it.   We are the victims here that we have a park that is not much use to large sections of our community