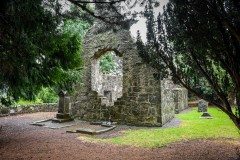 “As we enter Heritage Week, let us take a moment to reflect on the wonderful work undertaken by volunteers and local authorities throughout the other fifty-one weeks of the year. They don’t just preserve our Heritage, they enhance it”. So stated the Mayor of South Dublin, Councillor Guss O’Connell as he visited the Old Church and Graveyard at Palmerstown, which is linked to the legend of Tristan and Iosolde, at the launch of Heritage Week 2016 on the 20th August.
This historic monument can be found at the bottom of Mill Lane where it would have been the focal point of the original village of Palmerstown, or Tigh Ghuire to give it its earlier title, up to the late 1800s. There is evidence of monastic inhabitants here going back to the sixth century but the present Church was probably built about 910 AD. Outside the walls of the Church is an area known as the Clump Field which contains a prehistoric Ring Barrow and where every August the Palmerstown Fair, second only to Donnybrook Fair as a social occasion, was held.
It is said that William of Orange after the Battel of the Boyne stayed in the nearby Kings House, now part of the Chapelizod Industrial Park. The Church and legend has been reflected and commerated in more recent times in the naming of Pobailscoil Iosolde, Palmerstown’s Community School, which opened in 1982.
Mayor O’Connell, who lives locally, pointed out that this very significant part of the local community’s and South Dublin’s heritage could have been lost for ever were it not for the dedicated work of ‘The Pink Ladies plus One’, which is made up of a few local women and one man, who have done mighty work since getting involved in 2012. Working with the support of the County Heritage Officer and Palmerstown Community Council, they have very sensitively removed ivy and other unwelcome growth from the Church and surrounding area. They have rescued historic gravestones and restored dignity to the Church and Graveyard. “Their presence, painstaking work and vigilance has not only preserved this part of our heritage for future generations but has also minimised what could have been devastating destruction by mindless vandals in the past few months alone. These volunteers, and others like them across our County, are the hidden and unsung heroes of our Irish Heritage. We all owe then a debt of gratitude.” concluded Mayor O’Connell