The Sluice Gates in front of you and behind you were part of the City watercourse first built in the 13th century. It was served by the weir close by. For more information on the watercourse, please see the sign adjacent to the weir. A sluice gate is commonly used to control water levels and flow rates in rivers and canals. They can also be used in wastewater treatment plants and to recover minerals in mining operations, and in watermills. 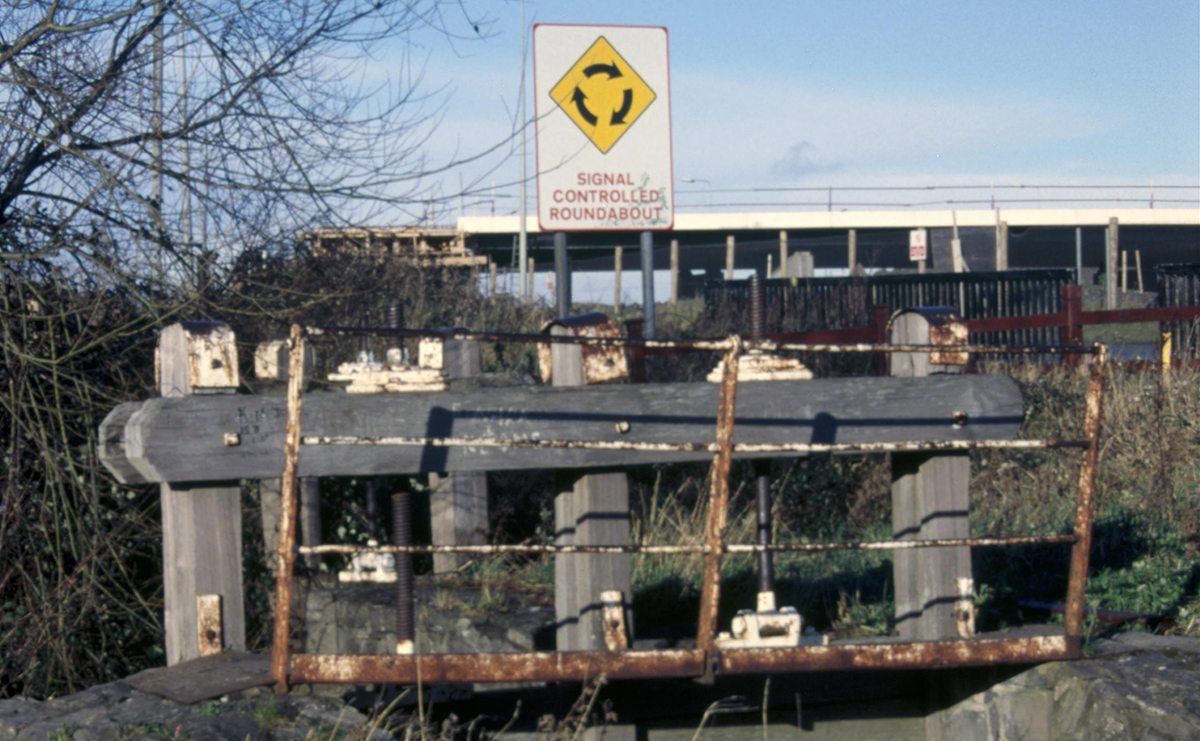 The term sluice gate refers to a movable gate allowing water to flow under it. When a sluice is lowered, water may spill over the top, in which case the gate operates as a weir. Usually, a mechanism drives the sluice up or down. This may be a simple, hand-operated, chain pulled/lowered, worm drive or rack -and -pinion drive or it may be electrically or hydraulically powered. A sluice gate is traditionally a wood or metal barrier sliding in grooves that are set in the sides of the waterway.

There are various types of Sluice gates. The one here is a Vertical rising sluice gate. A plate sliding in the vertical direction, which may be controlled by machinery. Cast iron has been popular when constructing sluice gates for years. This material is great at keeping the strength needed when dealing with powerful water levels. The waterway would have flowed from here down along the northern side of the Dodder to Templeogue House.

The next old house on the same side is Templeogue House, now a training centre. The lands of Templeogue were occupied in the 14th century by the Harolds, but in the 16th Century passed to the Talbots who held them for about two centuries. The landowner of Templeogue had the duty of Maintaining the City Watercourse which flowed within the townland for which he received a tribute of corn from mills using the water.

In 1655 there was a castle here in repair, a tuck mill and a house out of repair, as well as a number of cottages. The population was forty and Theobald Harold was steward of the town. Henry Talbot was ordered to transplant to Connaught, but was later restored to his ancestral home at Templeogue. 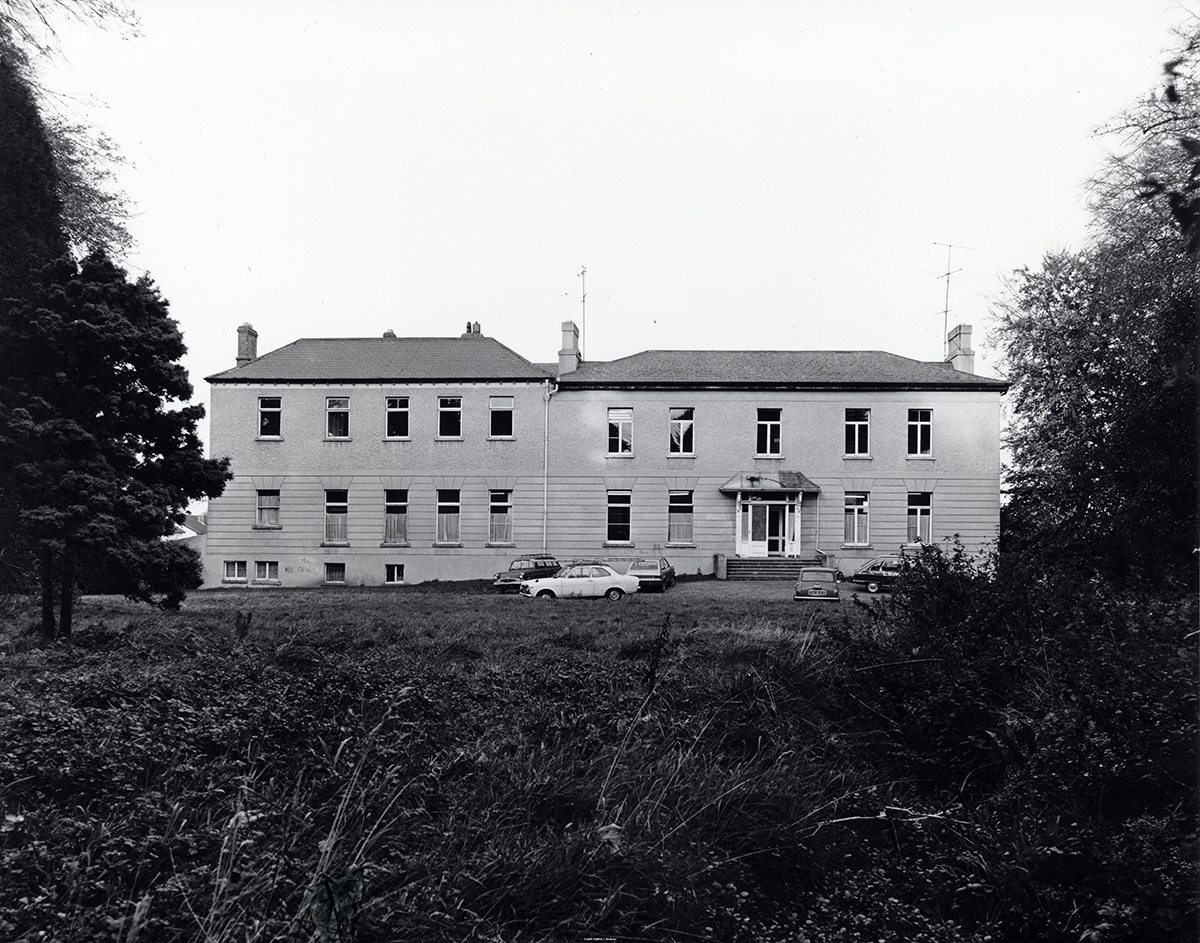 In 1686 the lands were mortgaged for £3,000 to Sir Thomas Domville. Sir James Talbot supported the cause of James II in 1688 and was attainted, whereupon Sir Thomas Domville got possession of Templeogue. Domville erected a brick mansion on the site of the castle, incorporating the vaulted undercroft and two circular towers. It had an immense window across the front and a number of gables. 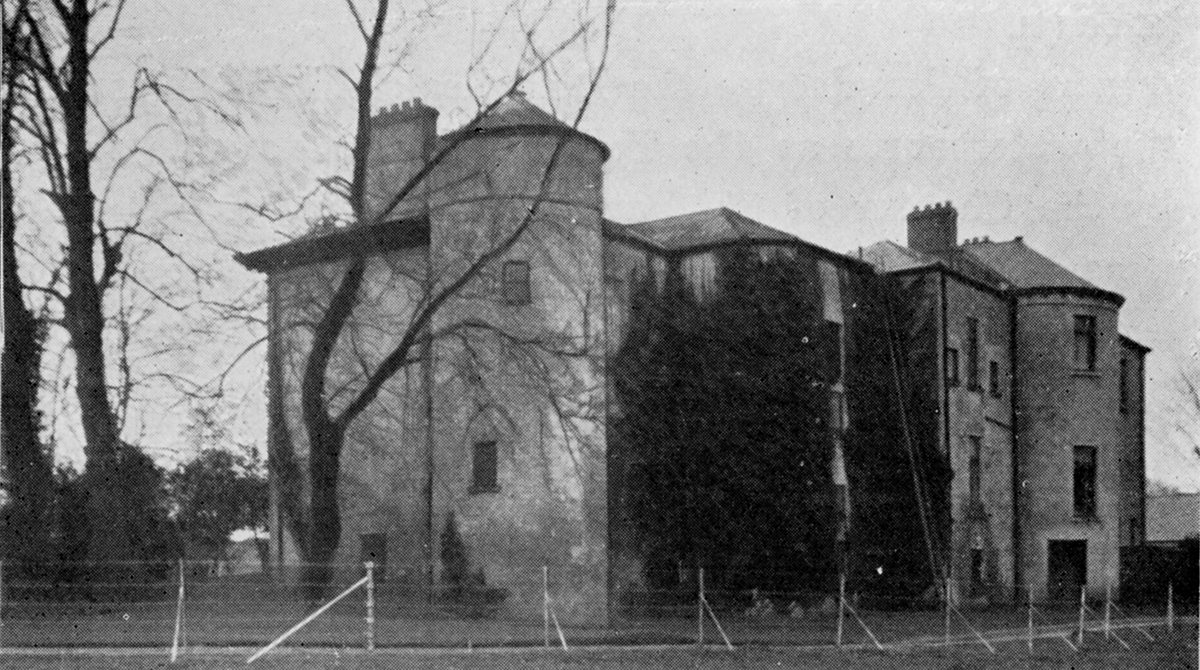 His son, Sir Compton Domville, laid out the grounds and used the City Watercourse which flowed through the garden as one of the main features. The course was in a direct line with the front door of the house and the water was made to flow over a series of steps, on each of which stood a statue.

A branch of the course was carried through a rustic Gothic arch so as to form an impressive cascade, and in one of the fields was a large earthen mound surmounted by a circular temple. The Domvilles claimed the same rights over the Watercourse as was formerly held by the Talbots, and in addition to the tribute of corn from the mills received rents from the Chapter of St. Patrick’s Cathedral and from the Earl of Meath who held the lands of St. Thomas Abbey. 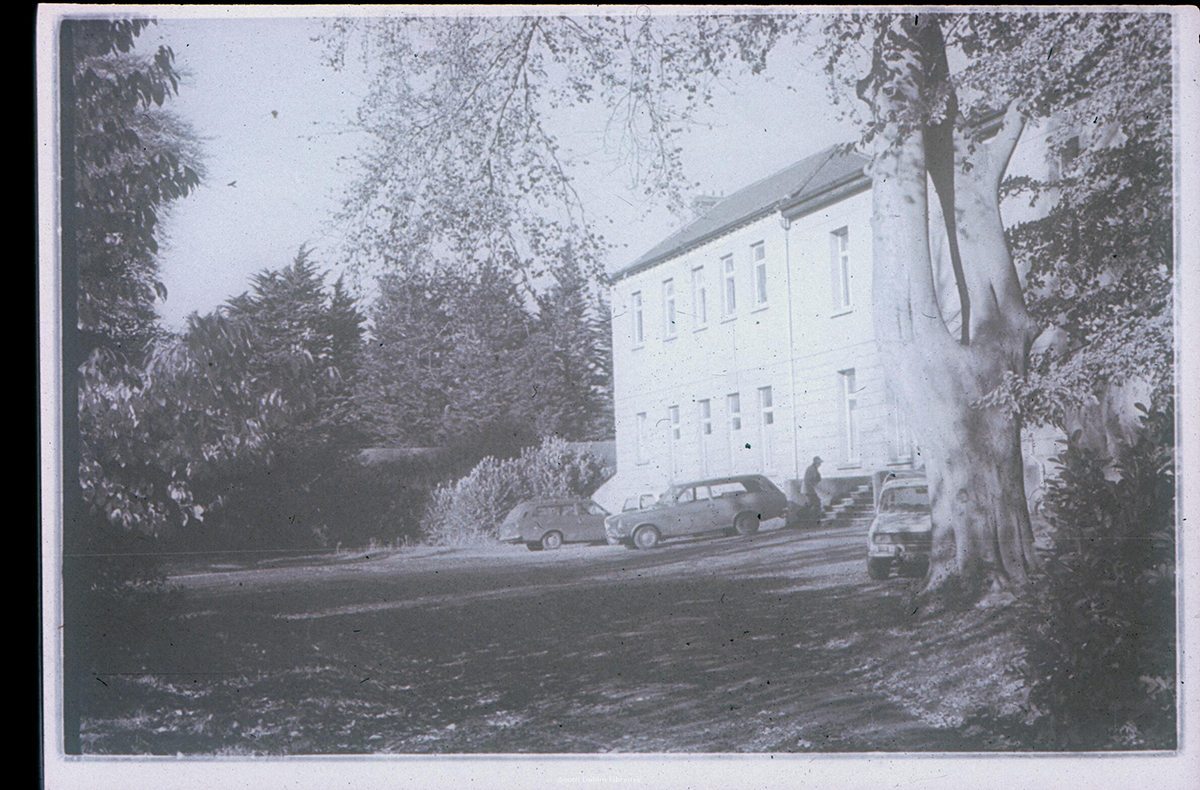 In 1738 Lord Santry, who was a nephew of Compton Domville was tried by the House of Lords for the murder of a servant at an inn during the Fair of Palmerston. The lords found him to be guilty but recommended mercy, and Sir Compton Domville used his influence by threatening that if the death sentence was carried out he would cut off the water supply from the city, which he could quite easily have done.

Lord Santry was granted a reprieve and subsequently a full pardon. In 1751 Sir Compton Domville inherited Santry Court, but continued to occupy Templeogue House until his death in 1768. His nephew Charles Pocklington inherited his property and took the name of Domville.

He lived at Templeogue until 1780 when, the house being in a bad state of repair, he left it and moved to Santry, taking with him many ornamental features, including the circular temple. About 1820 the house was taken by a Mr. Gogerty who was permitted to cut down timber on condition that he repaired the house. This he did by demolishing it and building the existing structure into which he again incorporated the original medieval vaulted undercroft and the two circular towers. The house was occupied from 1842 to 1845 by Charles Lever, the novelist.

In more recent years it was owned by the Columban Fathers and is now a training centre. The old house has been extended but the dry channel of the ancient City Watercourse still survives, in line with the front door and now planted along each side with mature trees. 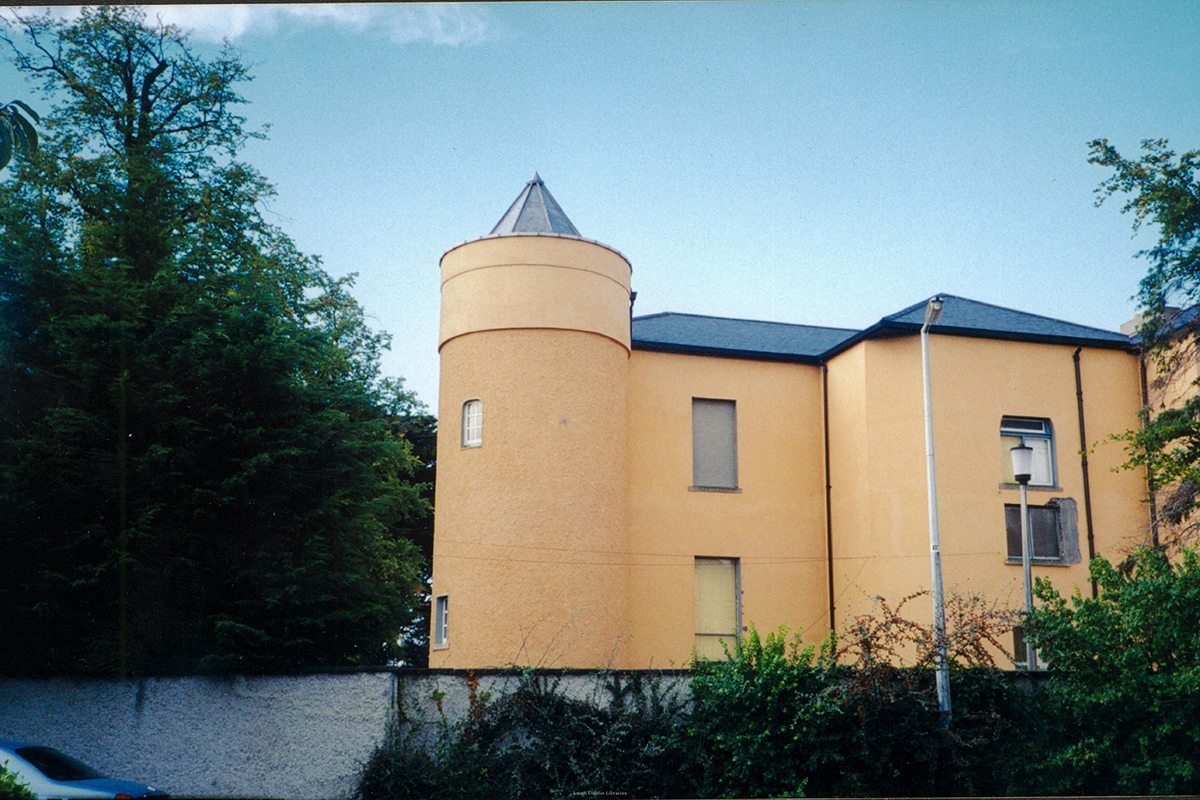 The rustic Gothic arch has also been preserved although it is many long years since any water cascaded down its mossy stones. The fields have been built on and the last traces of lakes and monuments cleared away. When the large mound upon which the temple stood was being removed in 1972, it was examined by an archaeologist from the National Museum in case it should prove to be an ancient burial mound, but no ancient features were found. 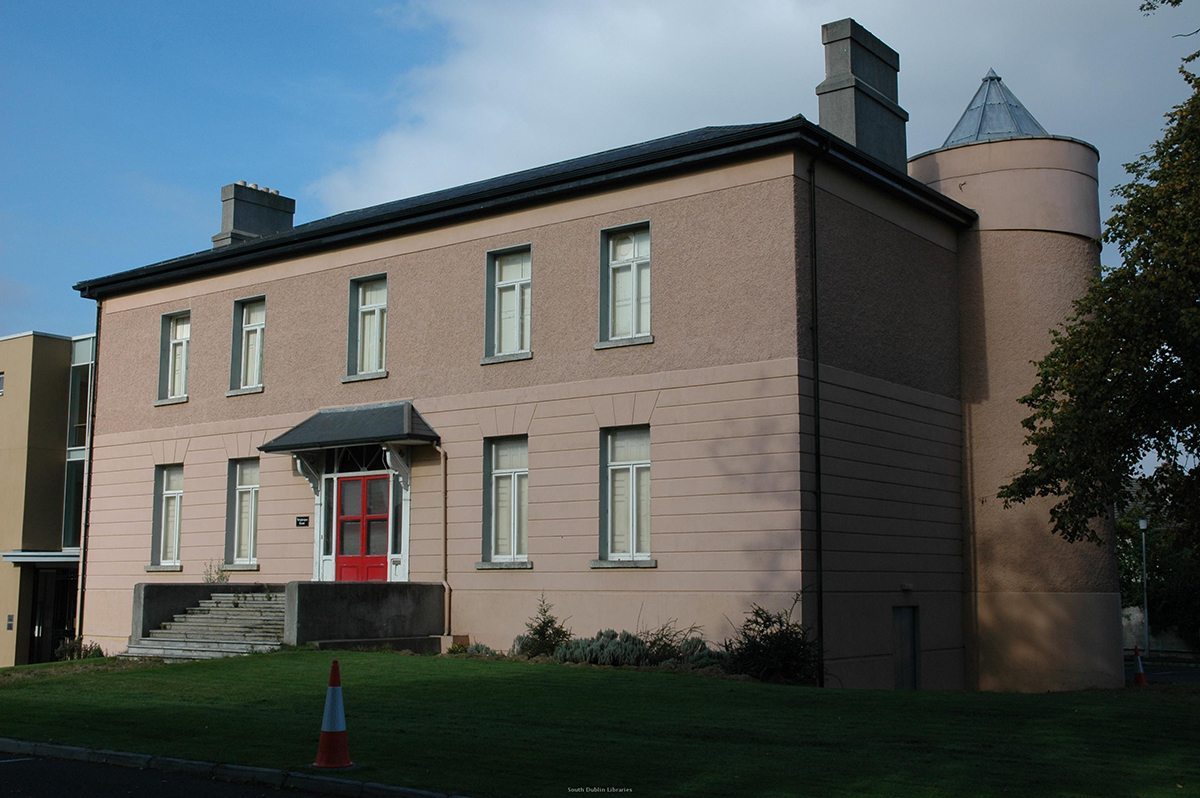