In front of you lies the City Weir on the Dodder where a considerable body of water is diverted into the old City Watercourse. This weir was built in 1244 in order to ensure a constant supply of water to the city and continued to serve this purpose down to 1775. Prior to 1846 there was a shallow ford below the weir and this was then the direct route to Tallaght and Greenhills but the force of the water subsequently cut out a deep channel at this point undermining the toeing of the weir and making the river impassable to vehicular traffic. 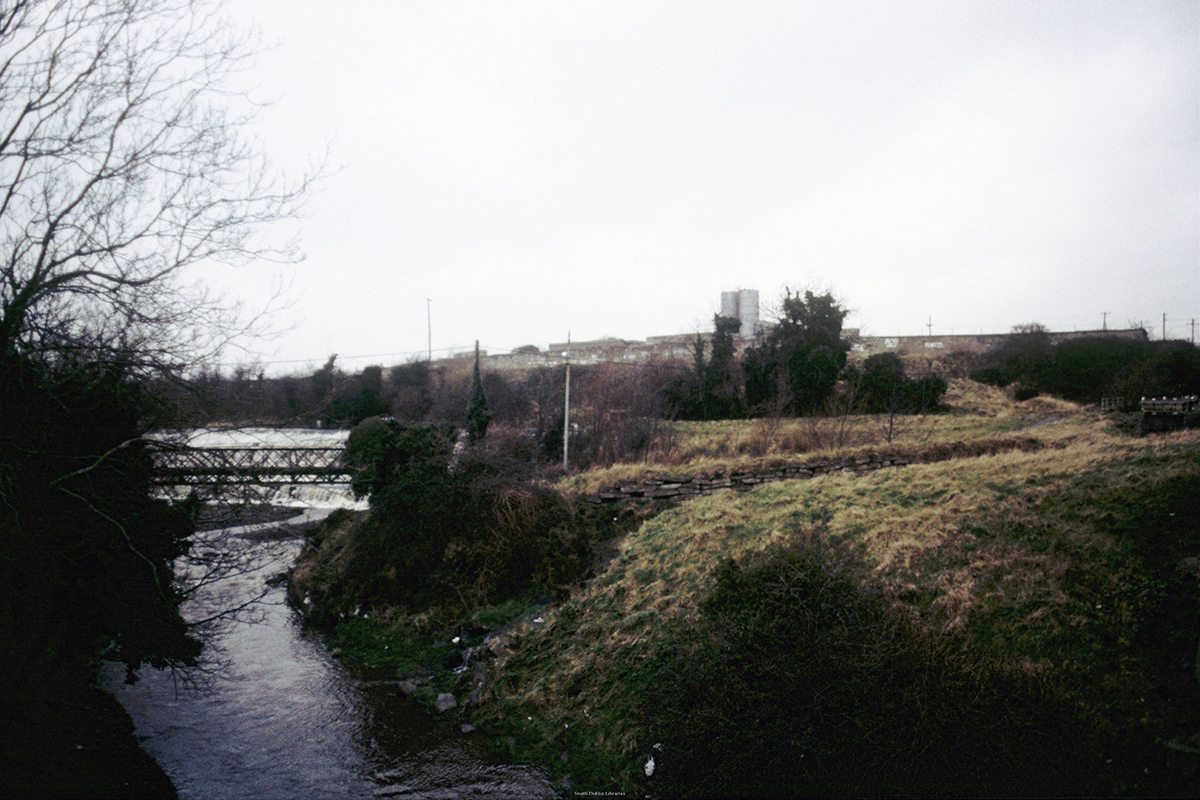 For many years pedestrians continued to cross by wading along the top of the weir, a dangerous practice when the river is in spate as a false step could result in a fatal accident. A wooden footbridge was later put up by subscription below the weir but was soon washed away in a flood. This was replaced about 1860 by an iron lattice-work footbridge which was raised about twenty feet above the bed of the river. This footbridge was replaced by the current bridge which was officially opened in 1995. 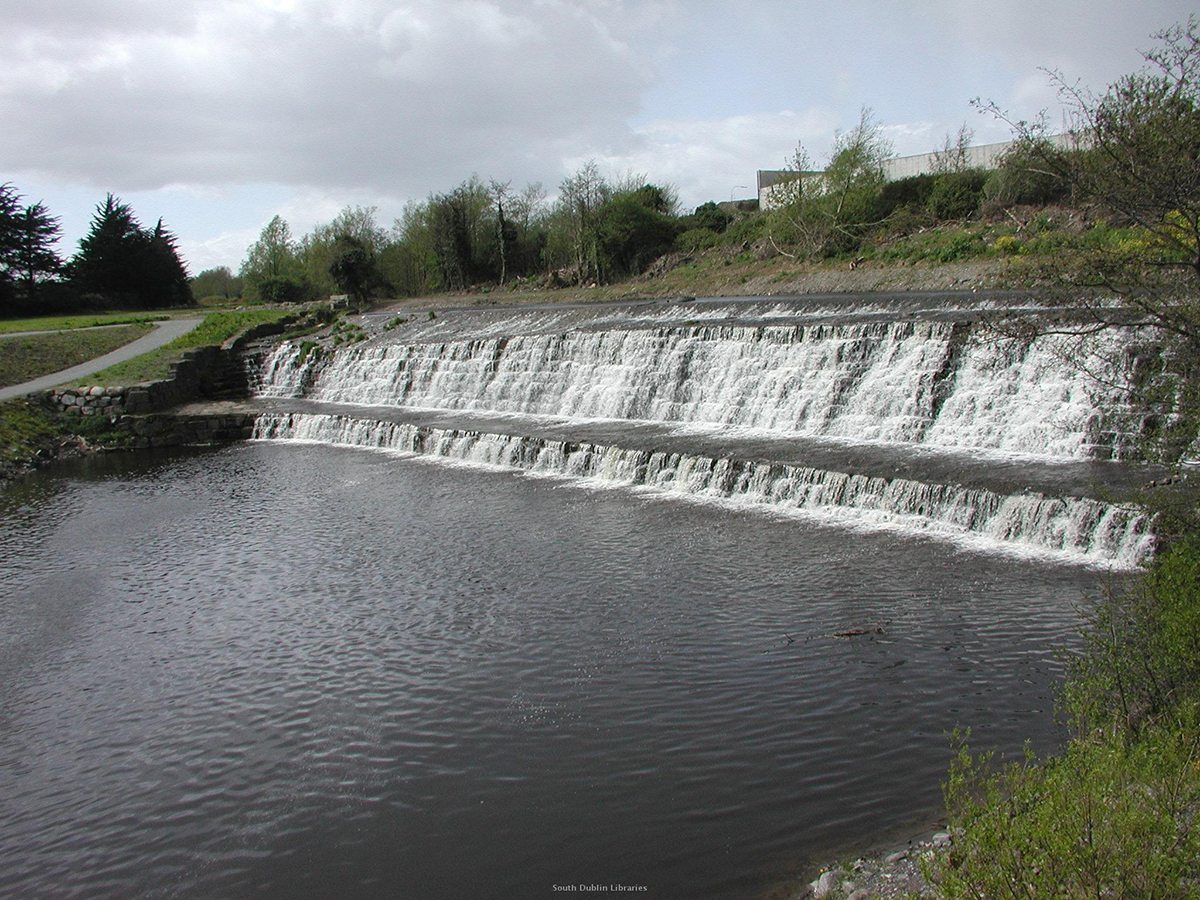 A weir is essentially a barrier across a river designed to alter its flow characteristics. In most cases, weirs take the form of obstructions smaller than most conventional dams, pooling water behind them while also allowing it to flow steadily over their tops. Weirs are commonly used to alter the flow of rivers to prevent flooding, measure discharge, and help render rivers navigable.

The discharge from the weir can be summarized as :

There are several different types of weirs. A weir may be a simple metal plate with a V-notch cut into it, or it may be a concrete and steel structure across the bed of a river.

The City Weir was built in the thirteenth century to convey water from the Dodder in order to supplement the water of the Poddle River which supplied Dublin with drinking water.

It was believed until lately that the citizens had built this in 1244, but recent research has shown that it was built by the monks of St. Thomas’s Abbey in Thomas Street at an earlier date and altered by the citizens in 1244 to increase the flow of water.

In normal states of the river almost all of the water was turned into the watercourse. This explains why the ford was located below the weir, in the almost dry river bed. There were sluice gates to control the water. 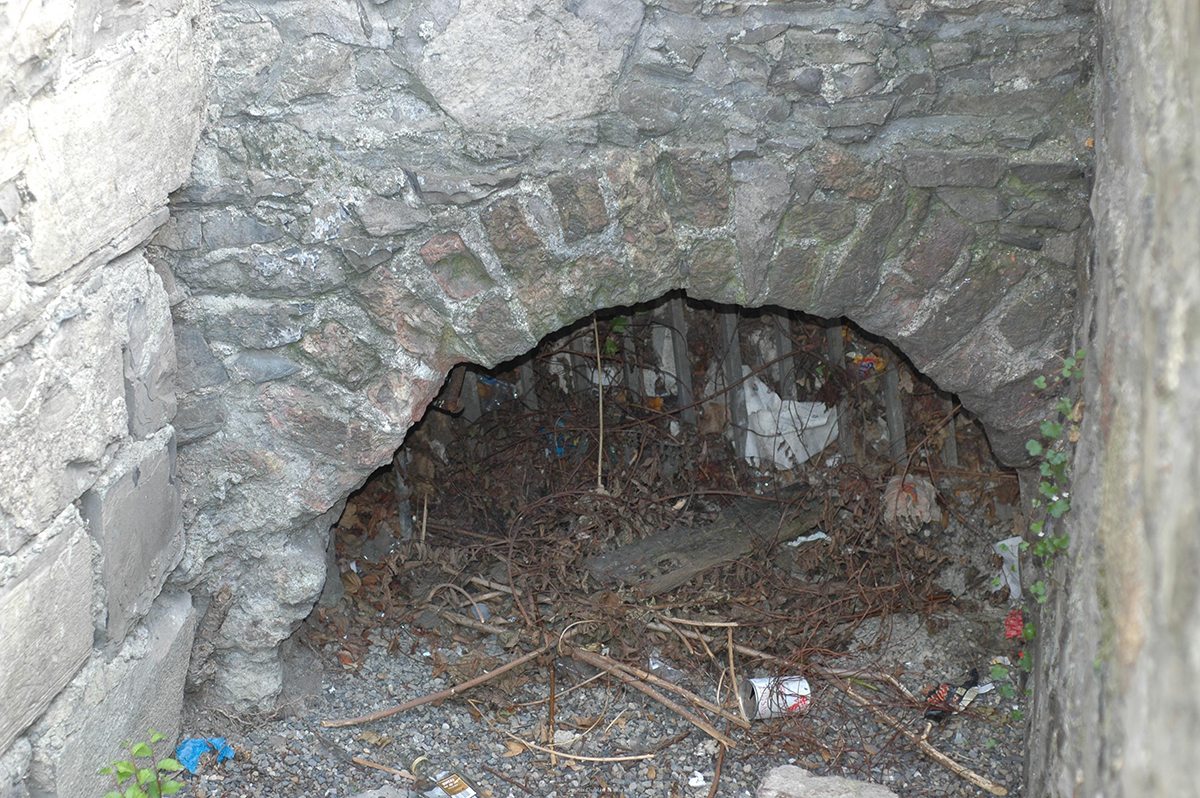 From 1845 when the Dodder was straightened and deepened there was a precipitous drop of 20 feet into the river bed where the ford had been.

For many years after this, the only way for pedestrians to cross during a flood, was the dangerous one of wading along the top of the weir.

A plank bridge was next put up by subscription, but was soon washed away and a lattice bridge was erected about 1860. The Balrothery weir was reconstructed by Andrew Coffey in the early years of the last century.

The present sluice gates and by-pass channels date from then.

In 1984, Dublin County Council relocated part of the connecting canal to make way for a new road.

Valerie Keeley the Archaeologist in charge of this project gives us this report :

Victorian Sluice Gates on Medieval Watercourse at Balrothery, Co. In Olden times the Tymon River Tallaght, flowed eastward to the Whitehall Road, where it then the Poddle River.

This river, which eventually flowed to the Mount, Argus/Mount Jerome area and on to Blackpitts and St. Patricks Cathedral around the old city walls, through Dublin Castle, discharged at a point downstream of the new Grattan Bridge. 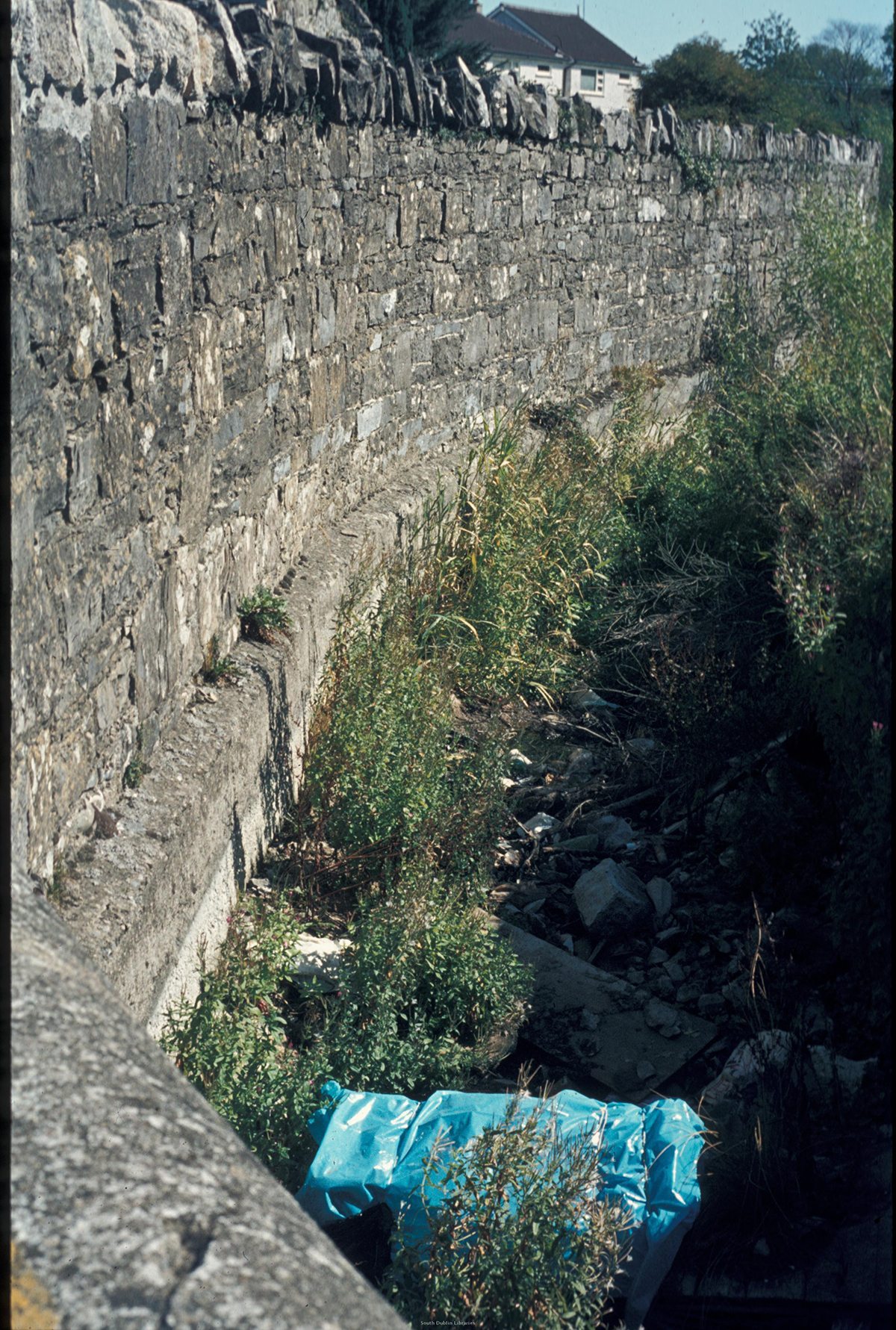 In about 1176 two eccliastical establishments were built-St. Patrick’s Cathedral and the Abbot of St. Thomas which stood behind St. Catherine’s in Thomas Street.

In 1200,the Abbey monks, to fulfil their water needs, constructed a take-off branch from the Poddle at Mt Jerome and brought it in a circuitous route of their Liberty, and then back to the main Poddle line at the Cathedral. Rancours developed between the Abbot and the Archbishop.

The monks, under royal patronage realised that they could not with impunity impair the supply of the Archbishop’s tenants, so in 1242 they devised a scheme to increase the Poddle flow. They erected the Balrothery Weir or Barrage on the dodder at Firhouse. A Watercourse was constructed to carry Dodder water to supplement the Poddle.

The watercourse ran across the fields and under the Tallaght Road by the old churchyard at Templeogue, through the grounds of Templeogue house, and joined up with the Tymon stream at the rear of the present Whitehall park estate. Fifty meters downstream a dividing weir was built Corporation by Dublin in the 1930’s to divide the flow.

One branch flows to Terenure College Lake via Fortfield Road and returns to the Dodder by the pond in Bushy Park. The other branch flows through Kimmage manor and crossing Kimmage Road West enters the city boundary. When it reaches Mount Argus it is again divided by a structure known as the Tongue or the Stone Boat. Two thirds of the water then flows via Harold’s Cross to Dublin Castle and enters the Liffey at Wellington Quay. The other one third flows via Dolphin’s Barn to the old city basin near James Street.

On at least two occasions the watercourse has been used as a weapon of leverage. During the civil war between the royalists and the parliamentarians in 1649, the royalist commander, the Marquis of Ormonde, laid siege to the city of Dublin. He camped at Rathmines, which in those days was far out in the country, and cut off the water supply through the watercourse, causing great privation in the city.

In spite of this stratagem however, Ormonde was roundly defeated at the Battle of Rathmines by the Parliamentarians, who broke up the Royalist army and raised the siege of Dublin. In the story of Templeogue House, the story is told of how Sir Compton Domville used possession of the watercourse to save his nephew, Lord Santry in 1738 from hanging.

Conor Feehan of Firhouse with an interest in Local History has submitted this very interesting article around the City Weir.   https://www.storehouse.co/stories/u0jgf-dublin-water-centuries-of-meters-charges-and-trouble¦