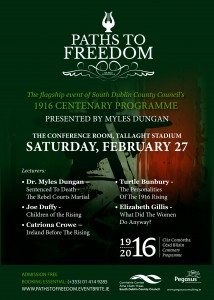 South Dublin County Council is delighted to announce a unique package of lectures, presentations and entertainment events to remember the 1916 Rising, 100 years on.

Paths To Freedom, our 1916 anniversary commemoration, is aimed at explaining the many “shades of green” that existed in the run-up to the Easter Rising, and to show that the so-called ‘long decade’, 1912-1923, was a pivotal decade in our nation.

Fronted by RTE broadcasters Myles Dungan, Joe Duffy and Turtle Bunbury, SDCC’s Paths To Freedom programme will bring together a team of authors and key academics with important things to say about the legacy of 1916, plus a cast of international performers, for a special two-part commemoration, comprising…

A day-long programme of talks and presentations on 1916 and its legacy
An evening performance of the songs and music of the era, showcasing the songs of John, Count McCormack, Lena Ford, Ivor Novello, Stanley Kirkby & George M. Cohan
Talks Programme

Paths To Freedom will concentrate on the changing nature of Irish politics, work, class and gender roles in the years leading up to independence, and explain that the Rising was part of a wider narrative, not the whole story.

The Conference Room in Tallaght Stadium will be the venue on Saturday, February 27, as SDCC welcomes a selection of top-class speakers, academics and TV personalities for a series of presentations on Ireland and the Rising.

The event is free, but booking is essential. To book, log on to www.pathstofreedom.eventbrite.ie or call 01 4149285.

Lecturers on the day will include…

Sentenced To Death – The Rebel Courts Martial
(Myles presents The History Show on RTE Radio 1 and is the author of multiple books, including Irish Voices From The Great War (1995), Mr. Parnell’s Rottweiler: Censorship and the United Ireland Newspaper (2014) and How The Irish Won The West (2006).)

Joe Duffy: Children of the Rising

(Joe presents Liveline on RTE Radio 1 and Spirit Level on RTE TV. His new book, Children of the Rising: The untold story of the young lives lost during Easter 1916, was the highest-earning Irish book of 2015.)

Catriona Crowe: Ireland Before The Rising

(Catriona Crowe is Head of Special Projects at the National Archives of Ireland, and manager of the Irish Census Online Project. She is currently working on an RTE TV documentary, Ready For The Revolution.)

Turtle Bunbury: The Personalities Of The 1916 Rising

(Turtle is presenter of The Genealogy Roadshow on RTE TV and author of Easter Dawn – The 1916 Rising and The Glorious Madness – Tales of the Irish and the Great War.)

Elizabeth Gillis: What Did The Women Do Anyway?

In 2016, South Dublin County Council will also offer a complementary musical show – The Count, The Countess & The Tommy – featuring songs and stories from the era of the Rising, centering on the music of the celebrated Irish tenor Count John McCormack.

This show is written by RTE’s Myles Dungan and will feature headline acts, including…

Lisa Lambe: A singer and actress, Lisa is best known for her work at the Abbey and the Gate, and as a member of international singing sensation Celtic Woman.

Brendan MacQuaile: Brendan is a classically trained baritone who performs widely in Ireland and internationally, and features regularly on TV and radio.

The show is scheduled for the Civic Theatre on Friday 14th October 2016. See www.civictheatre.ie for details and booking.

“The ‘long decade’ of 1912-1923 encompassed massive political change in Ireland, Britain and the wider world. These years saw the militarisation of the Irish question, culminating in the violence of 1916 and of 1919-1923, and also the Great War in which many thousands of Irishmen lost their lives. These developments had profound effects, not only on active participants in military and political affairs in Ireland and internationally, but on the people of Ireland as a whole.”

The Paths To Freedom programme is offered by South Dublin County Council in collaboration with Pegasus Consulting, the company behind the hugely successful history projects The Fighting Irish (2010) and The Great War Roadshow (2014-15).