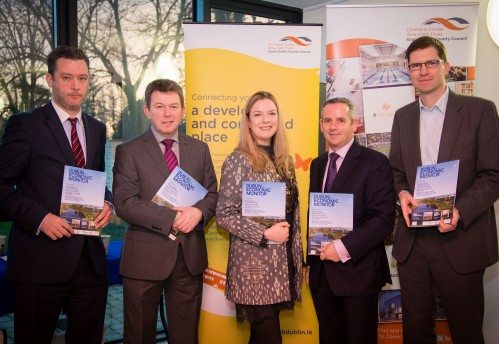 Dublin employment and sentiment strong as Dublin enters landmark year, but no relief on housing pressures

The fourth issue of the Dublin Economic Monitor has been launched today. A joint initiative of the four Dublin local authorities, the Monitor looks exclusively at the Dublin region, and tracks 15 key economic indicators. It captures data from the height of the boom to the economic crash and the subsequent recovery. Most of these indicators show that the recovery in Dublin is well- established, with particular improvement in the labour market, but issues persist in housing as residential construction remains weak and residential rents continue to rise.

Dublin unemployment rates fell to a 6-year low (7.8%) in Q3 2015 driven by exceptionally strong job growth across all sectors of the Capital’s economy.

Residential rents in Dublin maintained an upward trajectory in Q3 2015 to reach the highest level recorded since 2008.

Dublin housing completions totalled almost 2,900 in 2015, 11.5% below the 2014 completion level as the long awaited recovery in residential construction remains elusive.

Dublin Airport’s exceptionally strong year continued through to September 2015 as passenger arrivals in the month increased by 14.4% year-on-year.

Dublin Port handled over 32 million tonnes of cargo in 2015 with both exports and imports increasing.

Dublin KBC/ESRI Consumer sentiment in Dublin strengthened in Q4 2015 principally due to improved consumer assessments of household finances, and greater optimism regarding the jobs market.

Dublin was an impressive third ranked in the latest City Momentum index of innovation – oriented cities, behind London and Silicon Valley. This index was compiled by global real estate services firm JLL

This issue of the Dublin Economic Monitor also contains a report on the future of Dublin’s tourism economy by Orla Carroll of Fáilte Ireland, and a feature on scaling a software business in Dublin from Michael Cullen of Dublin Globe.

Speaking at the launch of this issue, John Lawlor, Director of DKM Economic Consultants said: “Employment figures and consumer and business sentiment continue to improve as Dublin enters a landmark year in its history, but there is no relief in sight on housing pressures. The external environment is broadly positive, although uncertainties are growing in the global economy.”

Austin Hughes, Chief Economist KBC Bank Ireland said: “After a setback three months ago, Dublin consumer sentiment has returned to a clearly improving trend in late 2015. Notably more positive views of household finances coupled with increased optimism on the jobs front suggest that Dublin consumers sense the economic upturn is beginning to have a clear impact on their personal circumstances. The sentiment trend in the rest of Ireland is broadly similar but gains were more pronounced in Dublin in the final months of 2015 as much of the earlier weakness was reversed.”

Andrew Harker, Senior Economist at Markit said: “The final three months of 2015 completed a strong year for the Dublin private sector, with growth of output and new business remaining substantial and showing little sign of easing. The expansion across Dublin remains broad-based, with each of the manufacturing, services and construction sectors recording sharp increases in activity. A key highlight from the fourth quarter was a pick-up in the rate of job creation at Dublin firms – the latest rise was the fastest since Q1. The outperformance of Dublin relative to the Rest of Ireland seen earlier in the recovery reduced somewhat during 2015, but this was more a reflection of a catch-up from the Rest of Ireland rather than any slowdown in Dublin.”

Access to the full report is provided by clicking on the following link: www.dublineconomy.ie

Register at the following link http://bit.ly/1W3Xdjs for quarterly updates on Dublin’s economic performance.